Welcome to the World of Rose Gardening or Rose Gardening World.  Take time and smell the roses.  Roses have been around for millions of years which just prove that roses are not difficult to grow. The Rose is also our National Floral Emblem and the state flower of several states.  Here at Rose Gardening World, you’ll find rose articles that will educate you about roses – its history, rose culture, rose profiles and even rose verses all in one place.  So visit Rose Gardening World often. 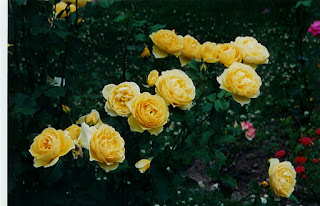 For rose lovers who want the charming form and fragrances of old roses with the repeat flowering of modern roses, there is no better choice than the David Austin Roses or what most people called the English Roses.  They came into being by crossing certain Old Roses, Modern Hybrid Teas and Floribundas.  Constance Spry, introduced in 1961, is one of the first English Roses hybridized by David Austin and its success contributed to the founding of the English Roses.  David Austin Roses is a flower arranger’s dream.  They can be used to make wonderful floral arrangements either on its own or with other plant materials.  With its voluptuous blossoms and dainty habit, you can duplicate the beauty and charm of an Old Dutch floral painting.

David Austin was the man who created the wonderful group of roses called David Austin Roses that won the heart and admiration of millions of rose growers around the world.  David Austin was honored with the Great Rosarian Award for 2010.  The introduction of David Austin Roses contributed to the increased awareness of the Old Garden Roses.  Gardeners who shun roses are now trying their luck with the English Roses for its variety of forms, its fragrance and the longer blooming period.  With its success, other growers started producing roses with the old garden rose characteristics.  The Meilland Company in France followed suit with its Romantica Roses.

David Austin Roses can be grown as a wonderful shrub or trained as a short climber. They have a shrubby growth habit making them ideal plants for perennial borders.  They grow from 3 to 5 ft tall as a shrub.  Some have the upright habit like Graham Thomas and Heritage and great for the back of the border.  The shorter varieties like The Mayflower and Prospero are best for the front of the border or use as bedding plants.  The taller varieties can grow from 6 to 10 ft tall with an equal spread like Abraham Darby and James Galway which make excellent climbers. David Austin Roses are very vigorous plants and easy to grow.  Those with lax habit can be placed against a wall, arches or a trellis and transform itself into a climber.  It should be noted that planting David Austin Roses in threes creates an immense impact in the garden.  However, if you have a limited space in your yard, one plant makes for a great specimen by itself.

The flowers of the David Austin Roses come in many forms just like the Old Garden Rose.  They can be cupped and globular, in the shape of rosette, quartered and petals can tend to reflex at maturity. The bloom will be minimal until the third year. Do not prune the new plants the first year as root development depends on the leaves for food. In the second year bloom will be greater and by the third year, you will notice there will be a tremendous amount of flowers.  You may then prune the plant lightly to the desired shape.  David Austin recommends a summer pruning to extend the blooming season.  Regular feeding especially with organic food and watering will reward you with abundant bloom production.  The varying shape of their foliage complements the charming shape of their blooms  Added to these qualities, their varying fragrances – the wonderful scent of the Old Rose, the Tea Rose fragrance, fruit, musk, heavy myrrh scent, are second to none.